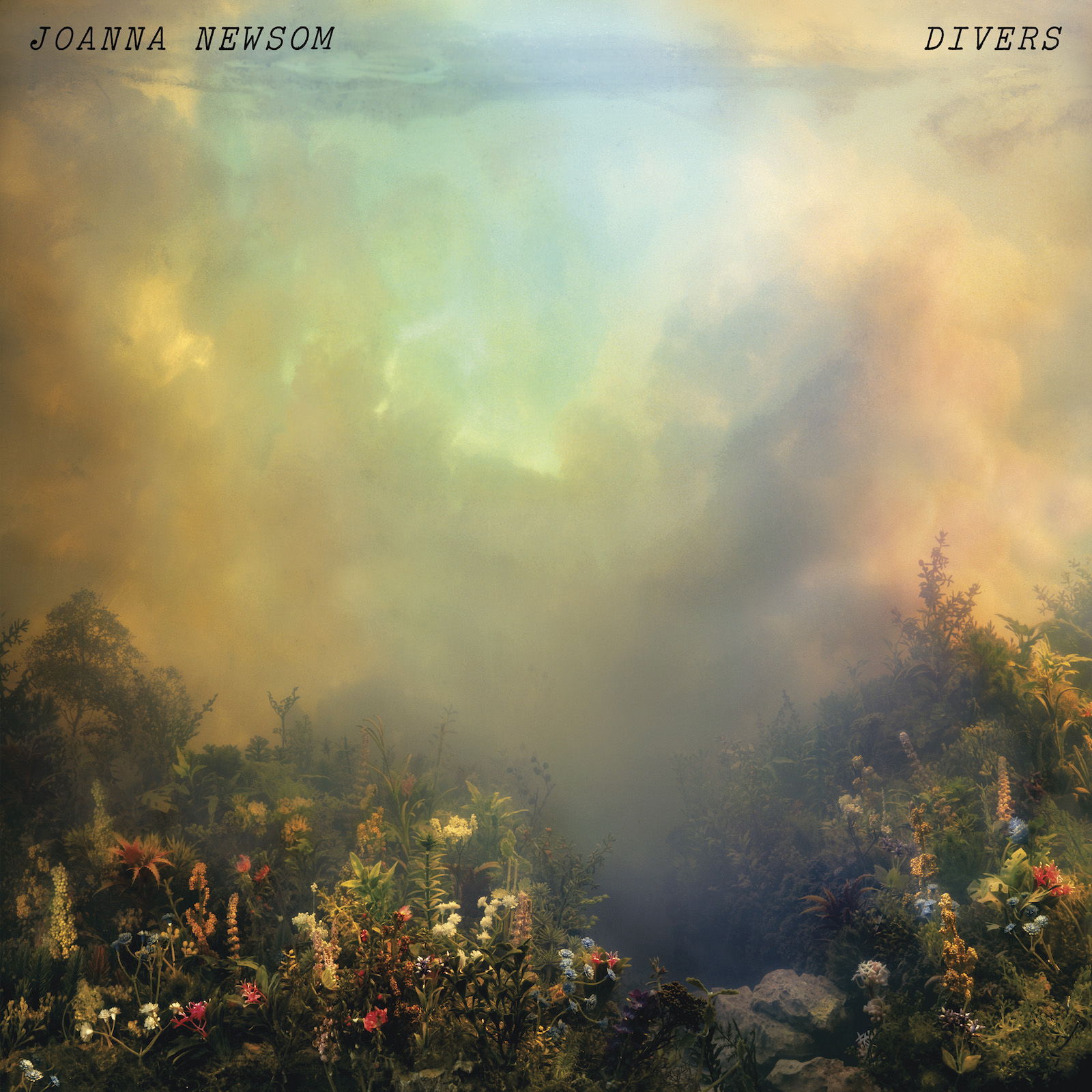 The soundscape and themes in Joanna Newsom’s Divers are as dense and opaque as the unkempt garden on the cover. Among the sea of white-lab autotune vocals heard on today’s radio hits a harpist sporting an old-style nasally voice straight out of Disney’s Snow White seems so foreign that it might take listeners aback if they’re not prepared for it. I’d wager not many people can recall the last time they heard a song containing harp instrumentals, let alone songs featuring them as the vocal lead’s primary backing instrument. This sheds Divers in an almost unworldly glow, as if it exists in a dreamlike plane where time bears no meaning and moves as freely as the wind. This feeling does not seem accidental as time itself is one of the central themes on every single track in Divers. The album as a whole seems to resist attempts to pin it down to a sentence-long elevator pitch, Joanna went on record saying that if it were that easy “I wouldn’t have bothered making a record”. Indeed, the album’s lyrics are so layered it can take multiple listens to begin having any idea what she’s trying to say deeper than the surface-level. With all the double-meanings at play and the inherit difficulty in following along with the album’s frequent use of time travel Divers will leave you lost in time and space if you don’t take care to follow along. For those that do, what awaits is a grand, never ending opus of love and time whose impact will stay with you long after you lift the needle.

One of the multiple events that ripple through numerous tracks on the album is the devastating time war waged by the grand 101st Lightborn Elite, a tale told through a mournful sea shanty the likes of which would make The Decemberists proud. While they aren’t explicitly revealed until the core of the record in “Walz of the 101st Lightborne”, their reveal gives songs like “Anecdotes” and “Time, As a Symptom” new context. In “Walz of the 101st Lightborne” it’s revealed that a mysterious invading force attacked the world for its resources, resulting in great casualties on both sides as well as the reduction of our once green Earth to nothing more than a dry dustball. Just as mysteriously as they had arrived the invading force soon left, leaving the defeated human race and withered planet in its wake. But as the wells ran dry, we found our salvation!

And we came to see Time is taller
Than Space is wide
And we bade goodbye
To the Great Divide:
Found unlimited simulacreage to colonize!

What luck! What providence! Humanity had at long last unlocked the secrets of time travel. The remaining humans quickly assembled all the men they could muster (leaving women behind in the process, see the album’s self-titled track) and sent them to the farthest reaches of time and space to scavenge and colonize. Such is how the human race completes the paradox and unwittingly becomes the very enemies that invaded and sapped the Earth in the first place. This remains the state of the human race for most of the album, trapped in an infinite war loop “between us and our ghosts”. It’s frankly like a plot plucked straight out of a thrilling two-part Doctor Who episode, I half expected that familiar blue box to come whirling into the album at some point1. It soon becomes clear, however, that there’s no Doctor coming to save us, and there’s no happy ending to be found. We loose more than just our precious Earth and our future in this “eternal return and repeat”, our interpersonal relationships suffer as well.

Before You and I ceased to mean Now
And began to mean only Right Here
(To mean Inches and Miles but not Years);”

At this point something might be nagging at you, wasn’t there an army or battle of some sort mentioned before? Yes! Track 1, “Anecdotes”, has carefully laid clues hinting at the true identity of the army and the nature of the war they’re fighting. One might assume they could possibly be one of the two sides in the time war after listening to “Walz of the 101st Lightborne” but a question posed to one of the soldiers by another (Rufous Nightjar) removes all doubt, “When are you from”? This is a question that only makes sense when asked to those who can traverse freely through time. Since we know “past” Earth doesn’t achieve time travel themselves until the end of the initial attack that means the first people we are introduced to in the album are indeed the illusive, ever present 101st Lightborne Elite, right in the mist of pillaging past Earth.

Joanna frequently plucks out characters from history to progress the album’s emotional narrative, many of which could be considered divers in their own right. Take for example John Purroy Mitchel from the album’s second track, “Sapokanikan”. John was a former alderman and later “Boy Mayor of New York” who led sweeping reform movements against the Tammany Hall political machine during his short career. Upon failing to get reelected, despite his measurable achievements, he left politics to join the Air Service. During a fateful training exercise, however, his plane took a sudden dive, leaving the unfastened John to plummet to his death. For the listener—knowing all too well that the New York political machine would later slip back into corruption—this sad tale fits cosily into Sapokanikan which highlights time’s ability to indiscriminately erode away all of humankind’s efforts.

Again following the idea of diving to earth from the sky, Joanna hints at another fictional character in the album’s tenth song, “A Pin-Light Bent”. She plucks a soothing, quiet scene with her harp of an airplane mid-flight (“Short flight, free rows: / I lie down and doze”) only to sing of disaster shortly after (“Short flight; free descent / Poor flight attendant”). While this is fairly sparse information there seems to be enough clues implying the flight attendant who got a “free descent” is the stewardess who fell to her death in 1962 when the emergency door on her flight suddenly sprang opened, sucking her out into the open sky. Perhaps by no coincidence this story had also inspired a poem by James L. Dickey which follows the stewardess’s stream of consciousness during the last moments of her life as she fell. In this stream, he frequently compared the stewardess’s descent as that of a “glorious diver” and often commented on how linear time as we know it seemed to cease as stewardess faced imminent death, as if a veil had been lifted and she was seeing life as it truly was for the first time. Joanna focused on this epiphany specifically in “A Pin-Light Bent”, leaving listeners with the calming, humbling peace that comes with accepting one’s own mortality and place in the universe.

Joanna embraces the notion of non-linear time not only at the thematic level in Divers but also at the meta level with how the songs are orchestrated and ordered. The primary manifestation of this attention to detail is in “Anecdotes” and “Time, As a Symptom”, the bookend, sister songs of the album. At first listen it becomes apparent these songs share a great deal in common such as the key signature and the mourning doves echoing at the songs’ fringes, among other things. These songs share more than just surface level similarities, however, and to see what’s going on we must dive deeper into the lyrics. In “Time, As a Symptom”, the first half of the song focuses on a new mother experiencing the joy of life as she cradles her newborn child. As the song progresses and the instrumentation swells we find ourselves being pulled away from this scene and seeing it in the ever growing bigger picture of time, death, and reincarnation. The simple piano we found ourselves with at the start of the song is now a grand orchestral movement growing in size and momentum as Joanna’s singing becomes more sporadic and urgent, as if we’re flying through eternities and lifetimes to the ends of the universe in a matter of a few lyrics. It quickly becomes neigh unintelligible as layers and layers of sound continue to be added, that is until we hear Joanna begin belting out over it a looped, military-style shortwave radio transmission, a plea:

As Joanna’s transmission cuts off mid-word a Mourning Dove calls out over the last ringing notes, now reverberating to the song’s end. It’s as if the album itself suddenly died, soon to be reincarnated as “Anecdotes” back at the beginning of the album. After all, where have we heard the name Nightjar before? Ah! Rufous Nightjar, the solider from “Anecdotes” who asked “When are you from?”. Joanna here is desperately trying to send a message back in time to Rufous Nightjar, or perhaps humanity as a collective, warning of the infinite disaster they cause and to instead “Transcend!”; to transcend above the hell time travel has caused and transcend out of the infinite war loop, all in the hopes of regaining our lost future.

As it turns out, Joanna’s message didn’t go unfinished. Those that have already listened to the album have heard the rest of it, in fact. For those of you with digital copies, put the album on repeat next time you give it a spin and let it continue a bit past the “last song” so it loops back to “Anecdotes”. Aside from the instrumentation fade out in “Time, As a Symptom” exactly matching that of the instrumentation fade in on “Anecdotes”, Joanna’s desperate plea is actually completed when you match the lyrics together. The last word in “Time, As a Symptom” is “trans-“ and the first word of “Anecdotes” is “sending”, making “transc[s]ending”:

Joanna alluded to this indeed being the case in interviews as she carefully avoids referring to “Time, As a Symptom” as the last song of the album and instead only refers to it as the album’s eleventh track. With this being the case, we can’t truly say this album has a “start” or “beginning” in the traditional sense; it’s a perfect lyrical and musical loop, no beginning or end.

However, this revelation carries great implications. It means the transmission didn’t work and the human race has failed to either hear or heed the warning to transcend since they’re still suck in the paradox throughout the album. I’m of the opinion that Joanna’s putting this up for the listener’s interpretation. Perhaps the story is hopeful, that during one of these loops the message will get through to the album’s characters and the human race will indeed transcend its fate. Perhaps not and the story is grim, with the infinite war loop being mankind’s ultimate fate. This message is both harrowing and hopeful and leaves the listener’s emotions following the listen as tangled as the album’s garden cover art.

Throughout many moments in our life time can seem like a linear prison. We wait to grow up. We wait to drive. We wait to graduate. We wait to find love. We wait to die. When we’re in moods like this Divers is a breath of fresh, green air to the soul. As we plunge in with Joanna, we can remember that time is what we make of it; it’s not a prison, but mental blinders we grow into as we age. Divers is that necessary reminder to occasionally take those blinders off, dive back into the joy of life, and transcend!